The mornings here have been beautiful. The sunrise over the mountains flooding the fog-covered valley is gorgeous. Around the house there are large flocks of water fowl of some sort; the white ones look like egrets, the black ones look like black egrets. There are also some larger birds that look like they belong to the raptor/falcon family, but we don’t know the name of them. I call them pollo del cielo in the meantime.

We had biscuits and gravy for breakfast. Everyone was pleased with how the biscuits turned out. At breakfast I requested that everyone speak only Spanish between breakfast and supper for the day; they agreed: some agreed like a ray of sunshine, others agreed like a burro, and that’s basically how the day went.

I found it very helpful and encouraging to be immersed in Spanish again. Everyone was willing to point out my mistakes, and most were willing to teach me better. Steph said she really enjoyed it, too.

We had devotions together, reading about Ester, singing three (or four, or five) songs, and praying. That was a great way to start the day.

Next we moved on to pulling apart the water system and reconnecting all the joints, but this time with glue. I show unto you a great mystery: If you use glue from the first can, it will set up so quickly you will find that the elbow is turned the wrong way, and you must catch a combi to town to get more parts. But if you use glue from the third can of glue, you may feel free to pull the joint apart multiple times over the next few hours. 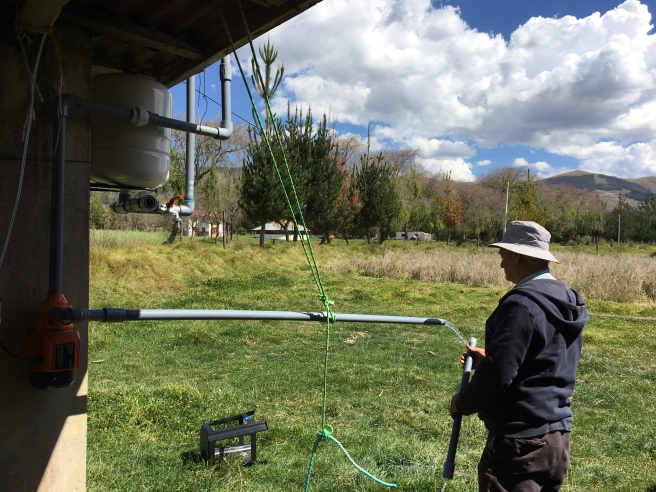 It is not altogether hard to take apart an installed system, but a group of otherwise intelligent men may be dumbfounded putting it back in the correct order so as not to come to a point where the whole mess cannot be connected. If only someone had thunk to number the pieces before starting….

Lamar spent the morning running after two large tanks of water. When we reached a certain point, Joel, Andrew, and I headed into Izcuchaca for more parts. I don’t think these combis were designed for Anglo-Saxon bone structures. 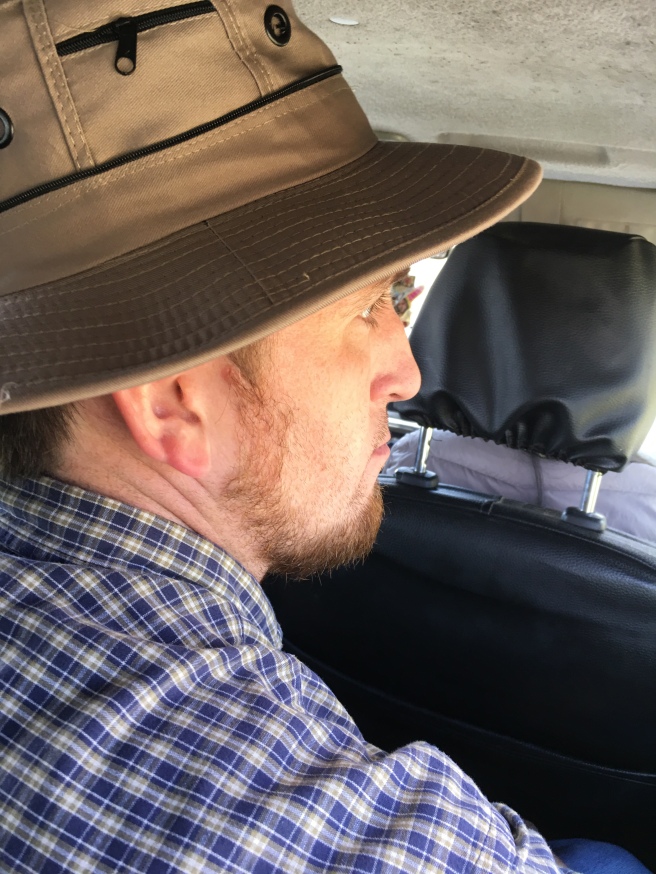 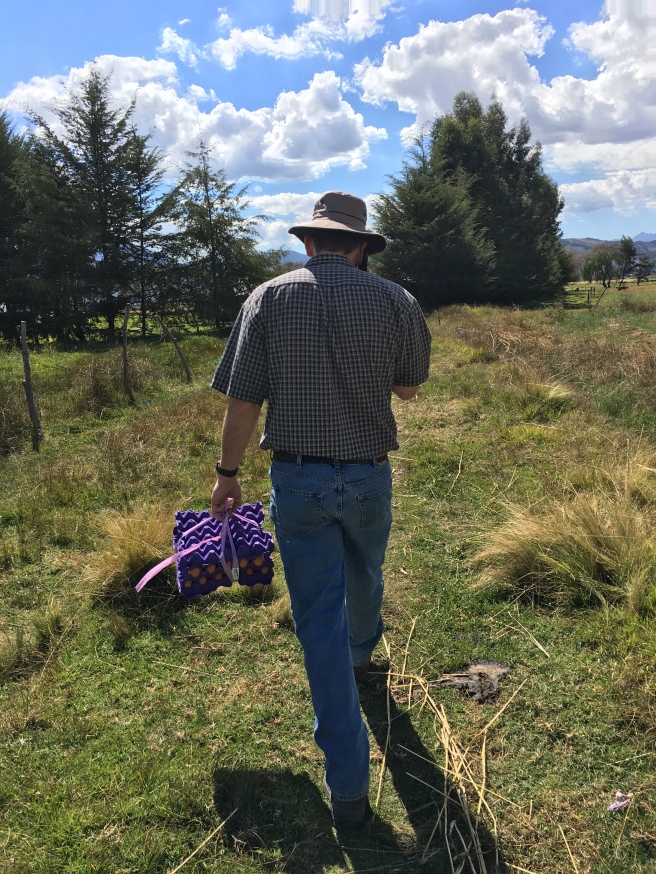 While in town, we picked up some plumbing pieces, some bananas, a shovel, a beanie, and some eggs. Doesn’t that sound like three men went shopping? We walked past the place where Levi’s used to live in town and stopped for eggs from Victoria, who remembered them fondly and wondered if they’re coming back.

Back home after lunch, the plumbing was completed and the water from the tanks Lamar had brought from Jose’s farm was pumped up to Lamar’s tank. Only two leaks now! Success?

Lamar and I spent a long time discussing what the next most important thing is for us to do. I decided to walk down to the big house to do a thorough walk-through. Lamar and Andrew took the empty tanks back to Jose’s farm. There they toured the cheese plant and discussed the process for getting water in from the community.

Turns out the solicitud for water access here at the farm was rejected this week, I think. This could mean we must start a six-month or longer process of beauracratic hoop-jumping to get a yes. Will that mean digging a well for water in the meantime? We had a conference call with Levi and decided to discuss with Fernando next week if he has any ideas. Please pray about this. Water is pretty important.

My walk through the house was good. I confess that Friday’s first impressions made me feel a little discouraged. That’s why I chose not to write about it. I figured if I took a little more time to look at it objectively, it might appear differently. Praise the Lord, I was right!

The place is pretty dirty. That makes it look like there’s much more work to do than there really is. Upon closer inspection, it appears that most of the rooms are pretty solid. The kitchen and downstairs bathroom need the most work, but even they are not disasters. The two bedrooms, upstairs and downstairs, on the southeast corner have significant water damage, so there must be an issue on the roof. Otherwise, I think the house needs a deep cleaning and a hug. 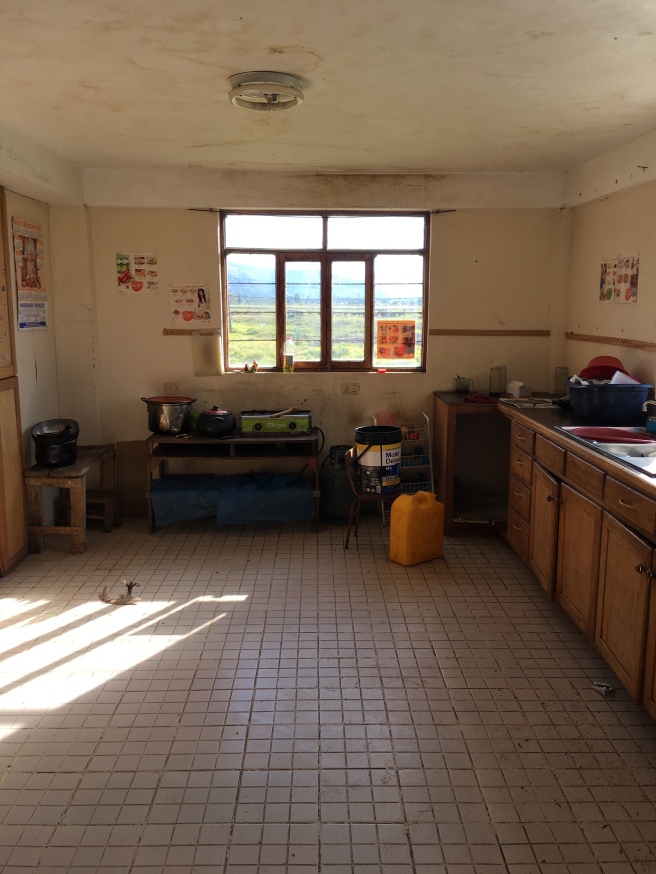 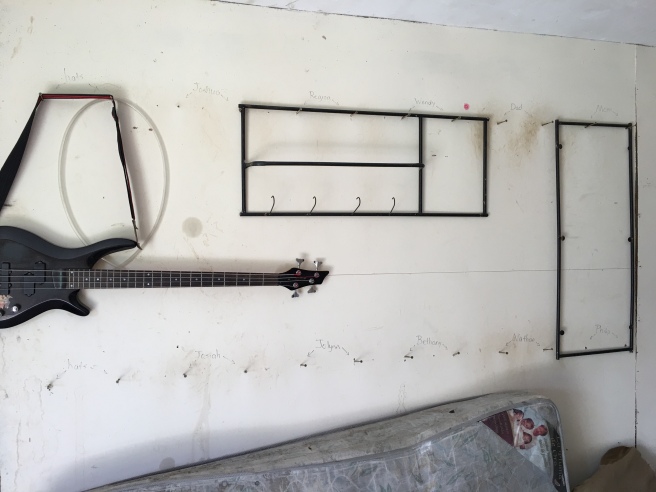 We can do that. And Lamar’s plan to help. We’re excited again.

After supper we were able to talk English again without guilt. This brought on a festive spirit that made for great games of Dutch Blitz. We thoroughly enjoyed ourselves, whether we were a prized heifer or a cow tail. We are not sure who won because there was a mucical-chair effect going on throughout the game. 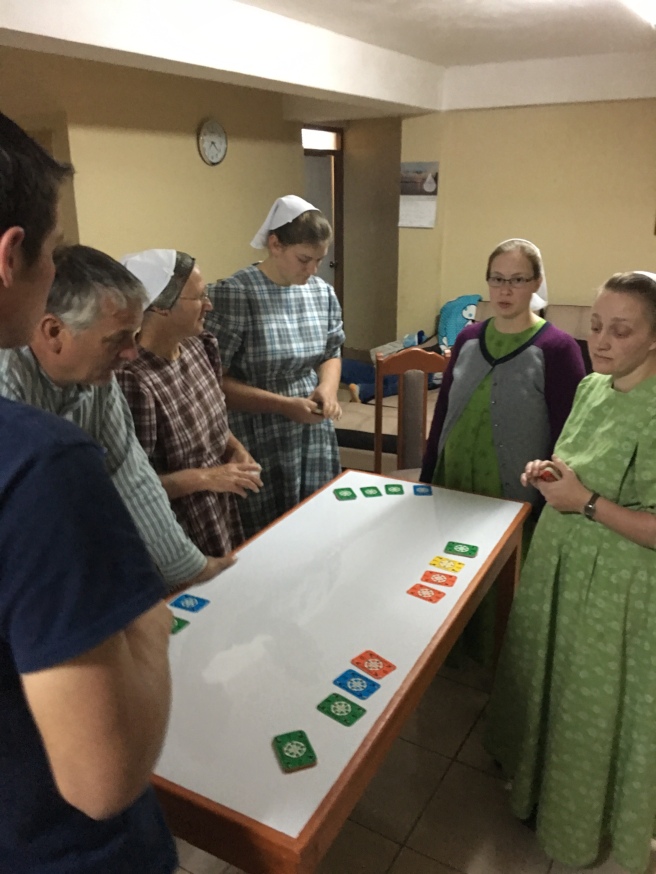 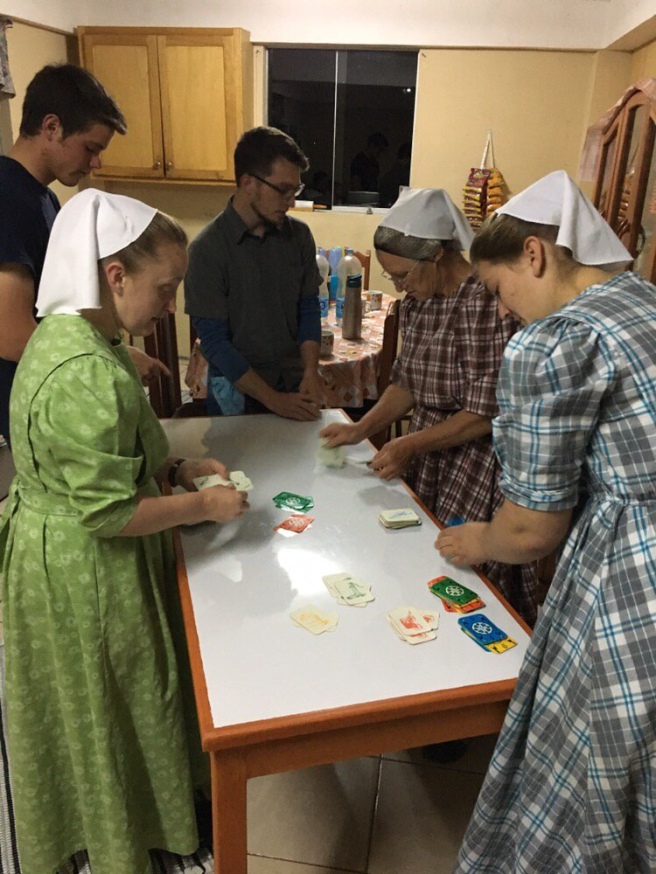 Do you know the proper response to someone if they smash a four down a millisecond before you do? Don’t feel bad if you assume it’s “Hey! That’s my pile! You don’t have to go so fast!” Many people make that mistake. We went for a more Elisabethean approach of “Oh, you got there first! I’m happy for you. I’m happy for everyone that’s laying cards!”

P.S. Beware of scales that are made of glass. If you eat all the chocolate-covered coffee beans that a dear, DEAR friend gave your sister, you may find the glass cannot hold you. 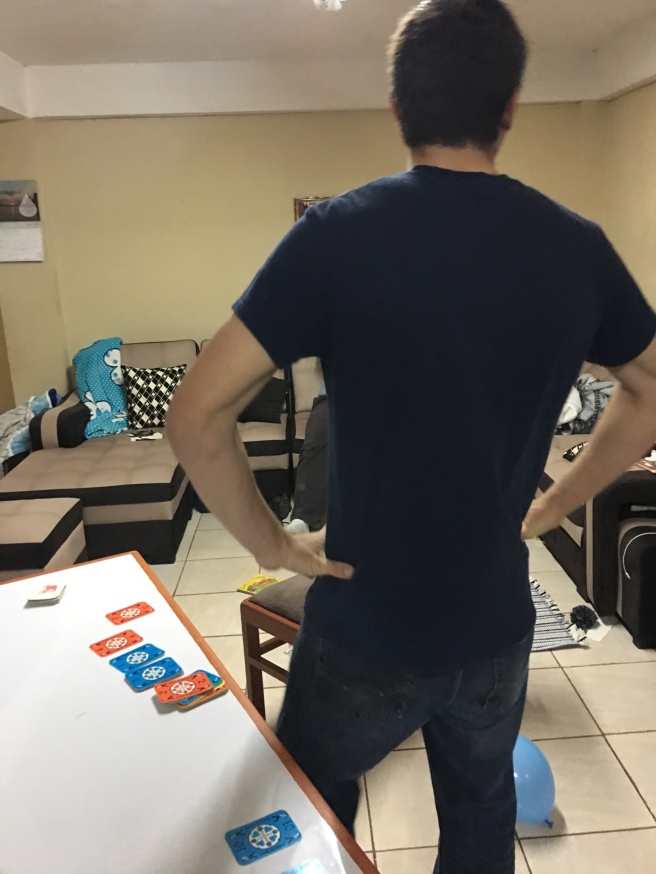 View all posts by Juan David