Tuesday’s goal was to finish the well and to get the process started for getting water from the community. The ladies went down to the big house to clean.

Joel and Andrew started on the well not long after breakfast. They wanted to go another meter down, if possible.

Lamar and I left around 9:00 to meet Fernando. He took us around to meet several members of the water committee. It was a long process of explaining and re-explaining the situation. The men started out suspicious, but they ended up being helpful and open. 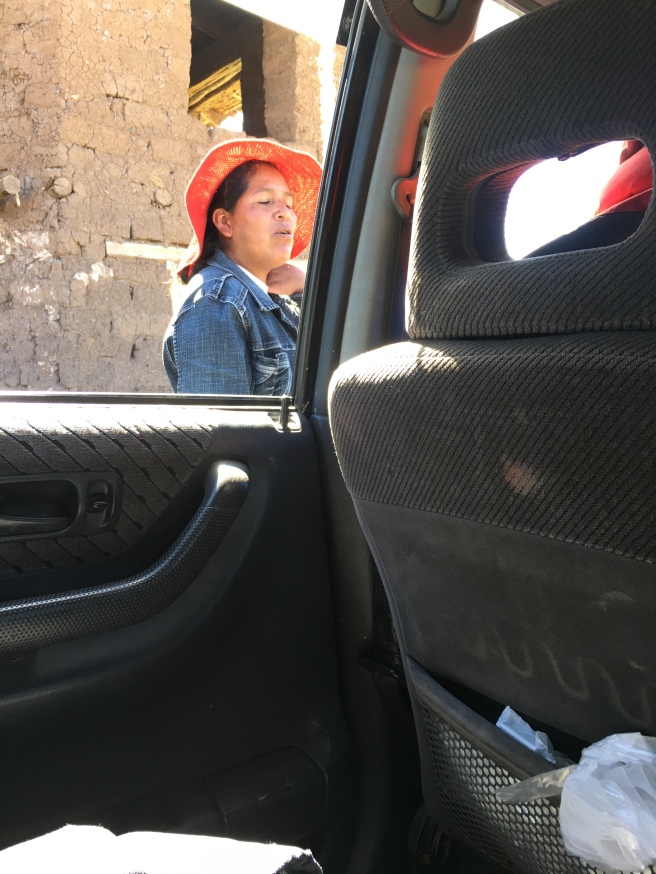 The last fellow we talked to was Wilber Solla, president of the water committee. He collected some info from us, phone numbers and names, then said he’d meet with the committee and the president of the community on Sunday. He thinks we will be able to get water here pretty quickly and simply.

That will be a great blessing, seeing as José had been told by the committee we’d have all sorts of hoops to jump through that could take six months or longer. It may be as early as next week that we’ll have an answer.

We returned around noon to find Joel and Andrew had given up. The more they dug, the more the walls caved in. We spent a long time trying to figure out how to keep the walls from caving more. We decided to use wood planks to create a wall all around the inside. I had suggested the idea using bamboo at breakfast, but we decided against it, so as to keep pandas from wrecking the well. 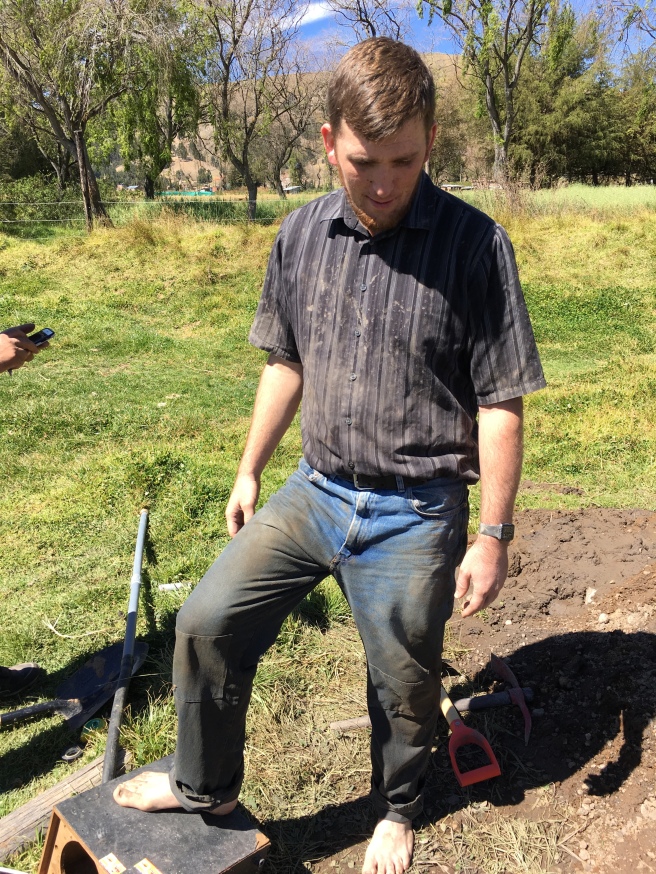 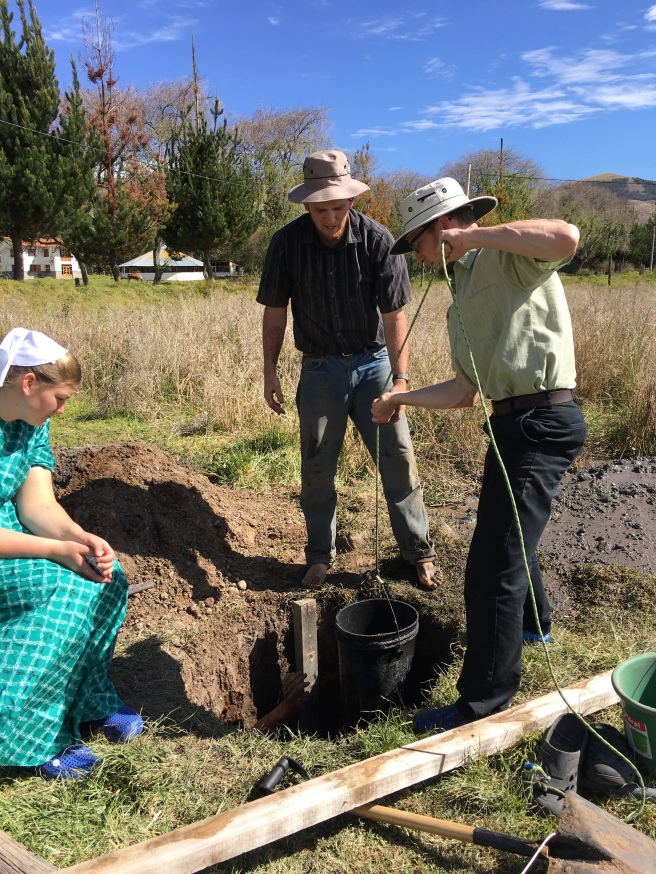 Lamar went on a quest for boards, a sledge hammer, and a hand saw. Andrew, Joel, and I cleaned out the water and muck at the bottom in anticipation of the plank wall. Joel was down in the well; Andrew and I ran the rope and bucket. Sadly, the boards had not returned by the time we were to the bottom and the walls started caving in again!

Lamar rented a truck to bring the lumber and supplies back, but the poor fellow got stuck trying to leave the yard. We men jumped on the side and bounced the truck to give it greater traction, and he actually got out! We were thankful it was only a ten-minute delay. 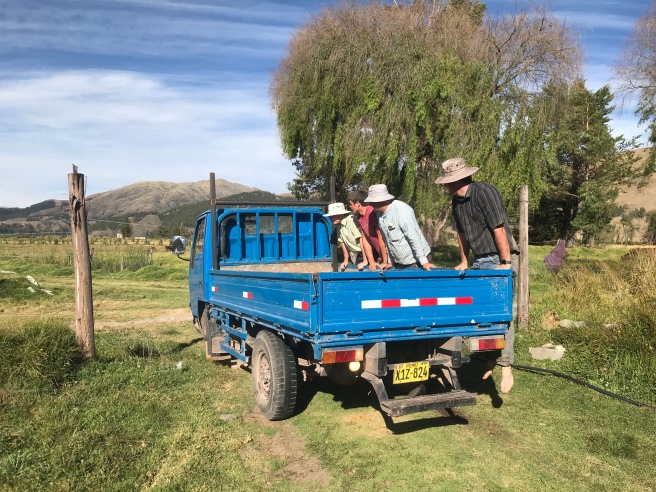 We let the water fill up the space, which was over 5 feet at the bottom. In an hour’s time we had over 300 gallons of water again. We’re thankful for water! But the walls kept falling.

Knowing the water volume was greater, I ran down to Fernando’s house to collect a larger pump. Beulah came with me as my translator. A large pump is very heavy to carry forty leagues! But Beulah thought I was doing so well that she decided to stop and chat with some ladies about how to freeze potatoes in the field overnight.

We tried, but could not get the pump working for us. It was 2.5 inch piping. We only had 1 inch and 2 inch.

All the further we got was to pound the planks in. We were all exhausted till we were done. Our hands were cramping from hammering; it felt like rigormortis was setting in. 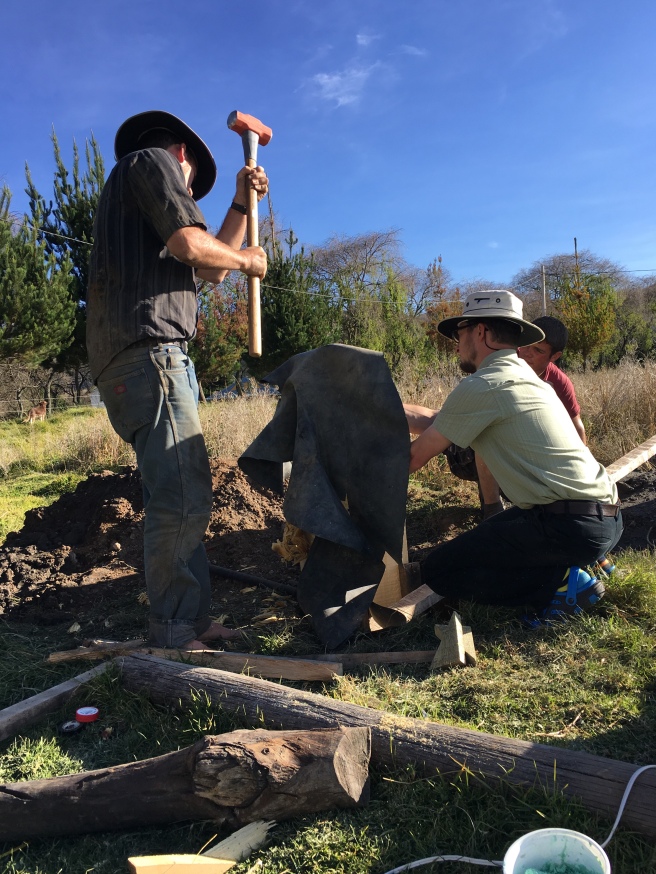 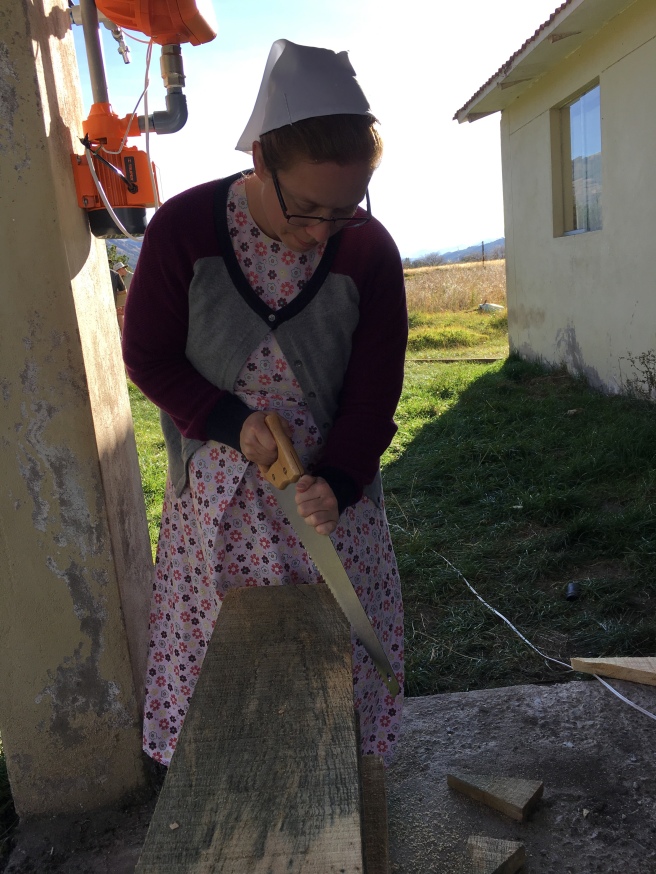 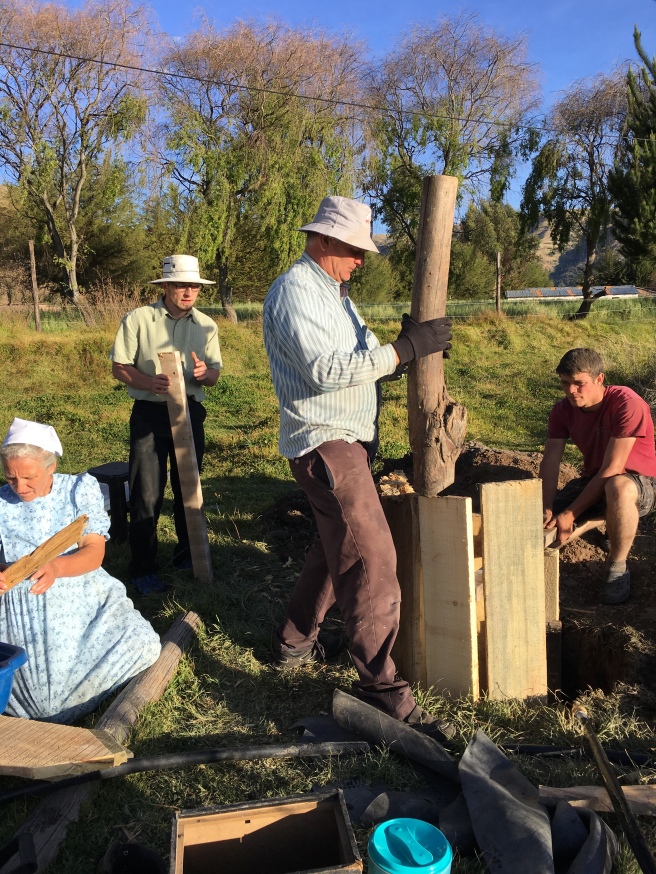 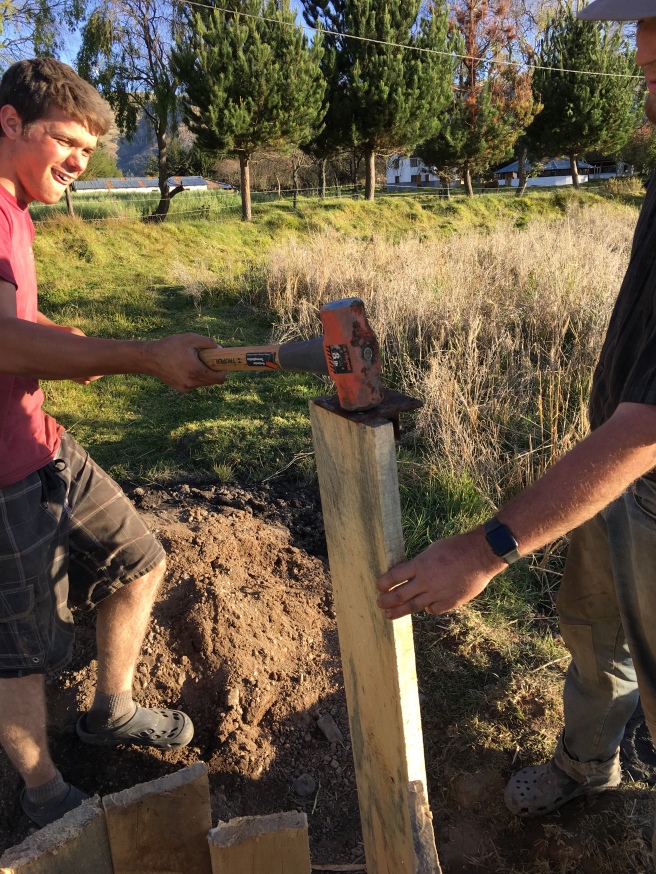 The ladies worked on one room for the day’s work. They were not sure they could do more than one room a week with how dirty everything is! They made tremendous progress with the room they did get to. They are debating cleaning the “sanctuary” tomorrow. 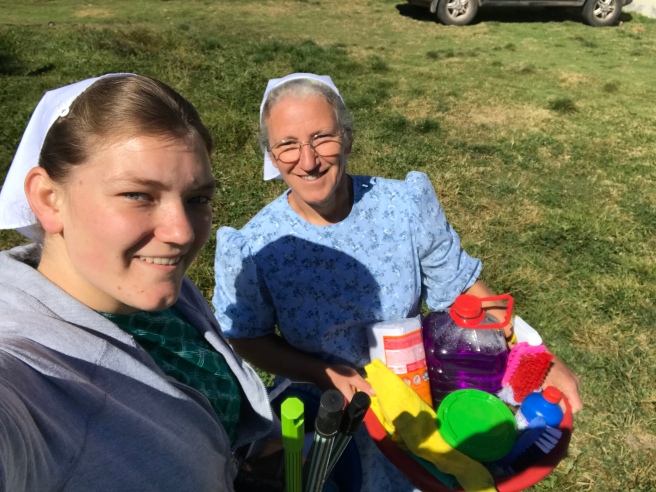 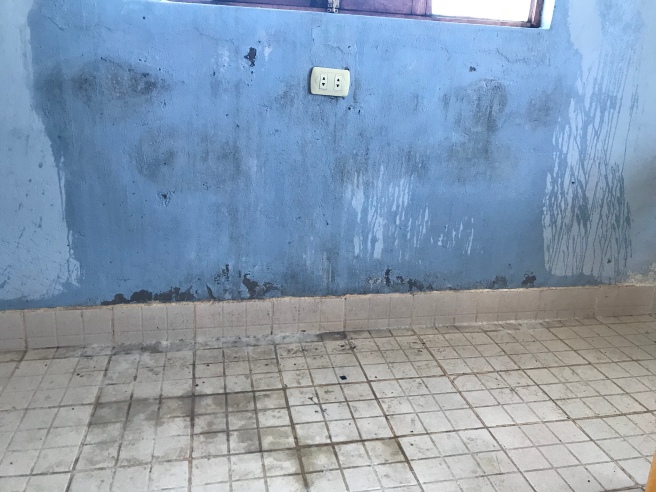 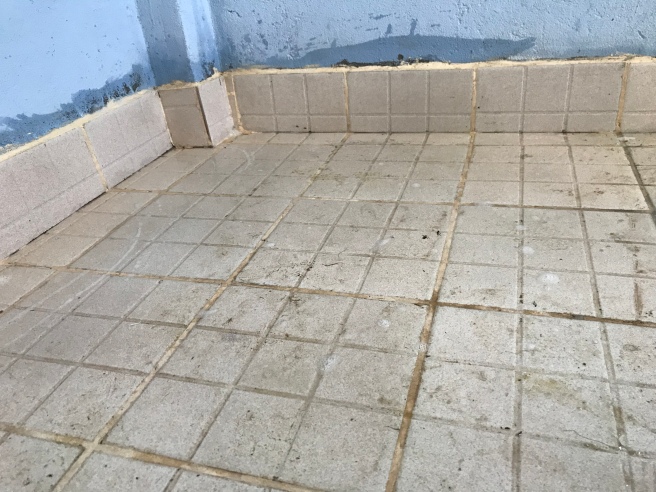 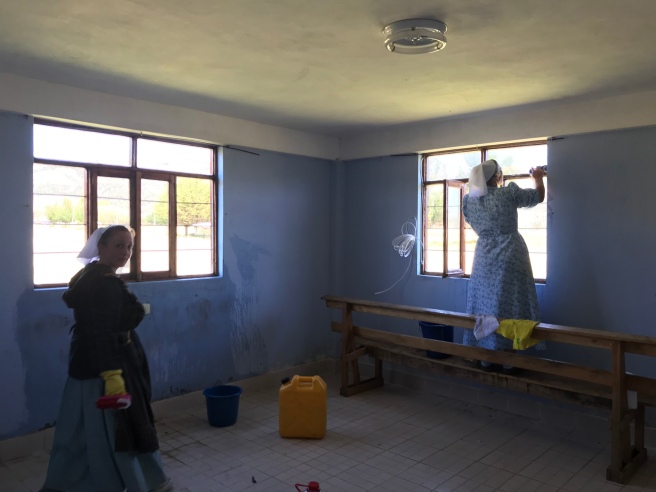 We were all glad to eat pizza and go to bed early!