Wednesday we were back at the well. With the planks in place for the well walls, it was time to pump out the water and jump down in to scoop out the loose mud. We started the pump before breakfast; it was pumping between 7.5 and 10 gpm. An hour and a half later, the well still had halfway to go, so we decided to start bucketing the water out.

Andrew and Joel had already had a turn down in the well, and Lamar selflessly gave his turn over to me. On a frosty morning in the Andes, jumping down into a well of water is–exhilarating. 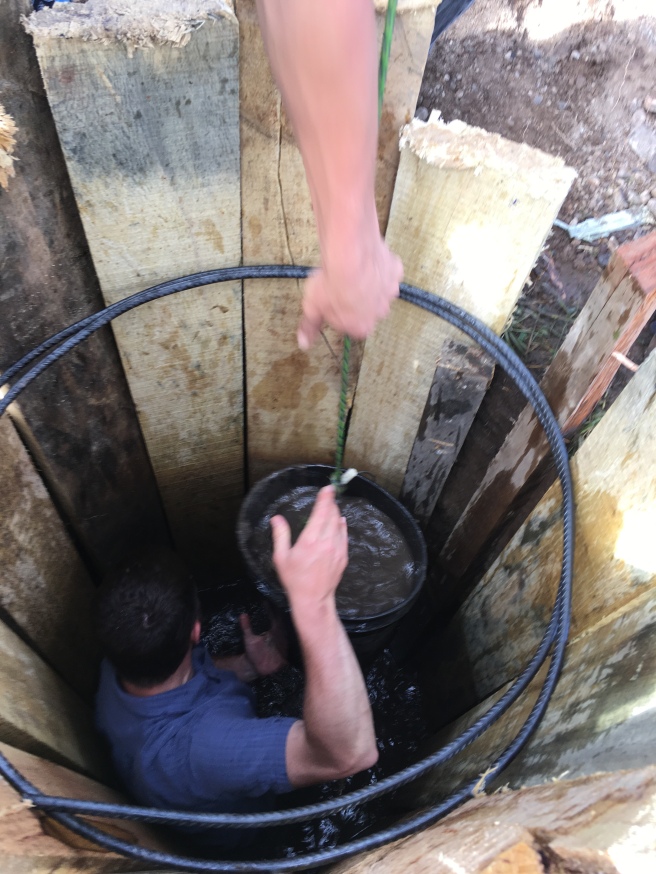 There had been some murmurs from the two other fellows about how they had sacrificed far more than I, having spent two separate days down in the well. I don’t know if there was any connection between those sentiments and the numerous times the buckets of mud and water accidentally were dumped over my poor head. Oops! Sorry! Bwahahahaha!

We cleaned out down to seven feet. Water was streaming in the whole while; we never got ahead of it. It’s hard to figure how many hundreds and hundreds of gallons of water we had to bucket and/or pump out. But at last we reached solid ground! Knowing we’d have over 5 feet depth with an average 4 feet diameter of water, we felt we could stop with that for now. 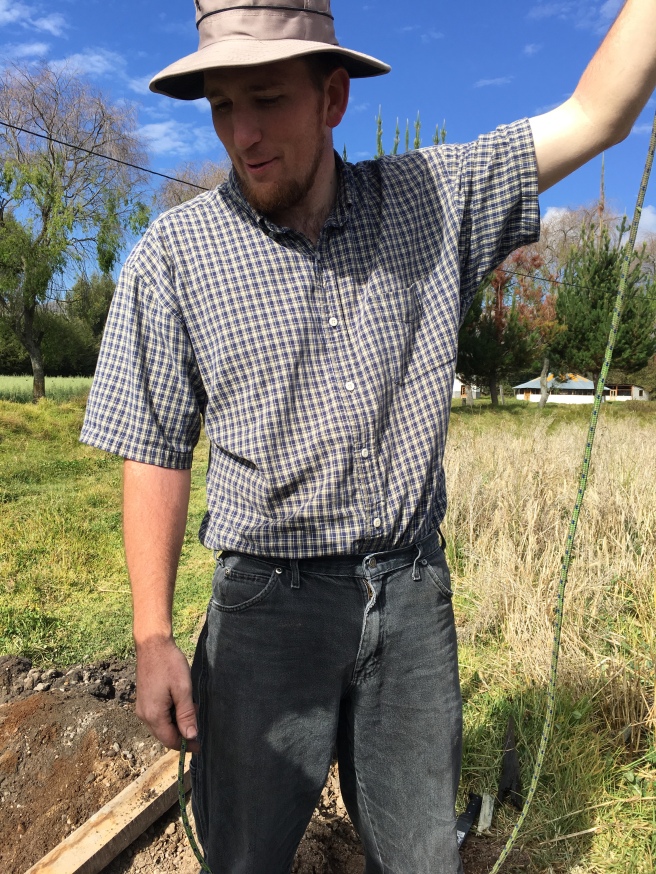 I’m planning to take a sample back to the States to test the water content for bacteria load and metals content and so forth.

After the well project was completed to that stage, we started working on digging trenches from the well to the house and from the house to the road, to lay pipes. Our hope is to have a double system that will include our well as one source, and community water as another source.

We worked as hard as we could, which is not very hard, over two miles above sea level. We could only dig with the pick a short while before being completely out of breath. We checked and found our heartrates were easily hitting above 150 bpm and oxygen levels were dropping into the 80%’s. 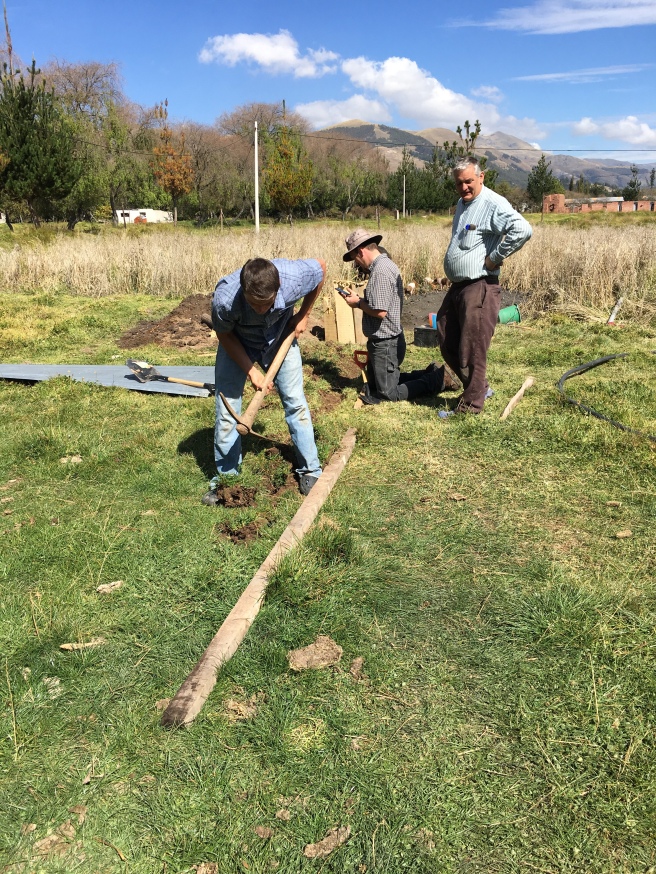 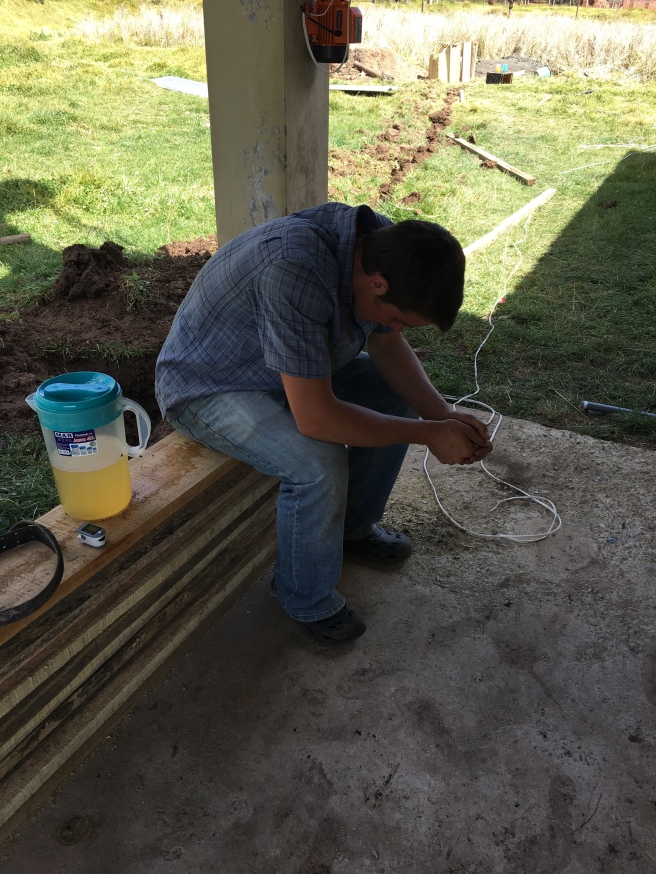 When we needed to take a break, we oohed and aahed over the cochitos. Lamar even picked one up and gave us a demonstration of what it means to “squeal like a pig.” 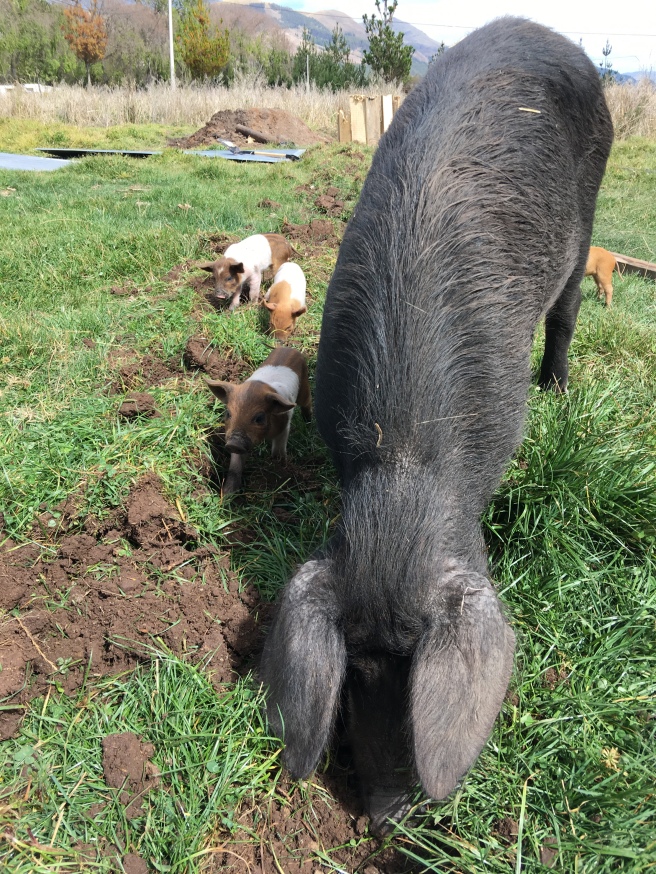 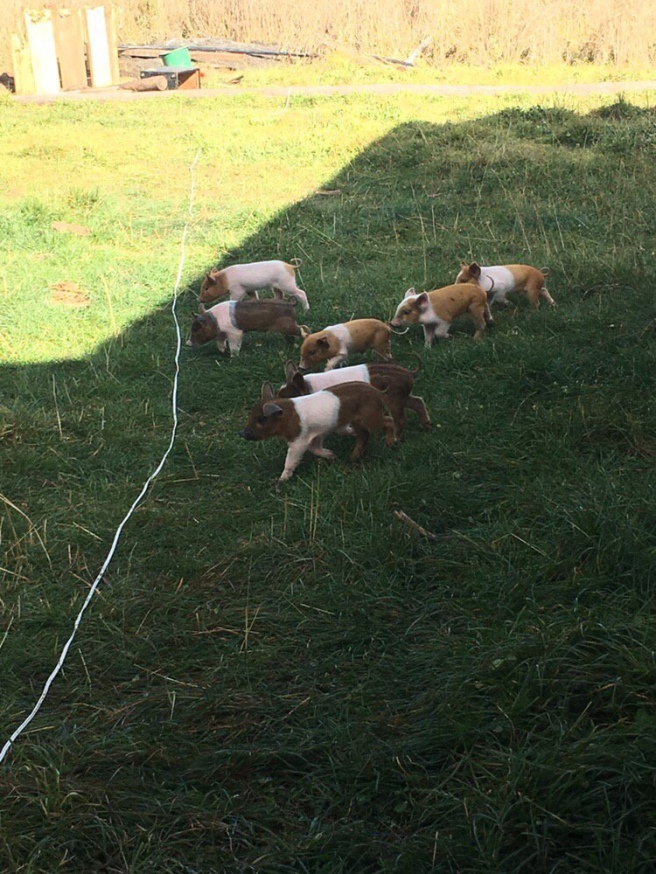 We struggled to find the existing pipes. The plan was to tie into what was already laid. We were getting discouraged after trying a couple spots. We stopped to pray, and the very next place Lamar and Andrew dug, they found the pipe by the road! 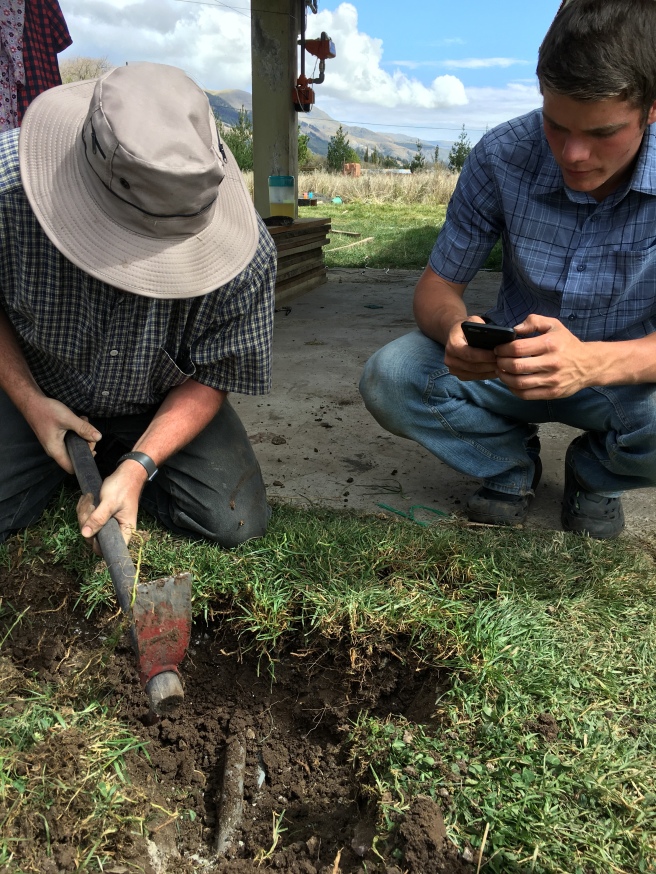 With a little more digging, we found the pipe by the patio. Andrew kinda busted it to smithereens with a pick, but–Hey!–we found it!

By then it was lunch time, so we abandoned the water project for the day in order to run into Izcuchaca. We men were hoping to find a place to have church services, and we had to pick up some paint for the big house. And Lamar needed to get more data for Juanita because he loves her more than words can say.

We stopped at Bitel and took care of the phones; then we walked a short jog down the street and stood in a corner beside an existing iglesia to pray. Andrew, Lamar, and I each prayed, asking God to show us where we should go.

Then we went from place to place to place. Lamar made some calls. Some people wanted way too much for us to afford ($400 per month); others didn’t want to rent to extranjeros. We walked down one street, up another, then over to the original street to walk further up.

Lamar saw a place across the railroad tracks. Andrew hung out, while I walked further up the street. I noticed a man on the third floor beside the building for rent that Lamar was calling about. I watched the man awhile as I wandered up the other side of the street to look at another place for rent. When I turned around, I saw the man had come out onto the street and was talking to Lamar.

Andrew and I ran across to join them, where we learned that the fellow had been watching us from his window as we walked around town, and he had deduced we were looking for a place for church. He wanted to offer us a place he had that was a few blocks away. It was brand new; no one had ever lived in it.

Was this God’s answer?!

We went with him and looked at the first floor of his building. We didn’t get measurements, and none of us took pictures of the first floor, but it is ~500 sq.ft. of open space with two baños. Everything is brand new. The building is located only one block from the puenta where the combis drop folks off in Izcuchaca. It seems like an ideal location.

He then took us to the second floor to wow us with a three-bedroom apartment. It’s almost done, just a few finishing touches before someone could move in. He’s asking ~$200 per month rent on that.

The building has six floors with the open lower floor, four apartments, and an open roof floor. The other apartments are several years from completion; only the second floor is finished. The sixth floor is a common area for doing laundry, sitting in the breeze, whatever. It would be for all four apartments, once they are finished. He thought the third floor may be done in less than five years.

Wow. We felt awe-struck. Lamar asked the fellow (Alberto) if he believes in God, and Alberto said he’s a Christian. Lamar told him how we had prayed and how God had led us together. We were all amazed.

Beulah and Stephanie were doing some shopping in town, so we called them over to look with us. We were all impressed.

Now we have to decide what to do. We don’t need a third house right now, but should we hang onto the apartment? Could we use the apartment to teach English classes in? We don’t know what we should do. Please pray about that. 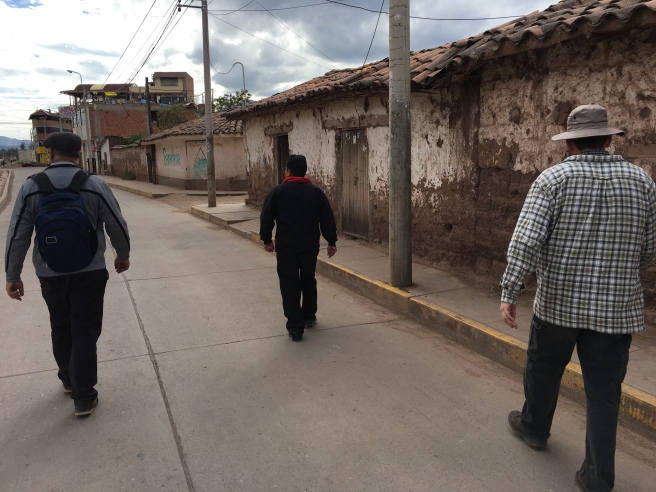 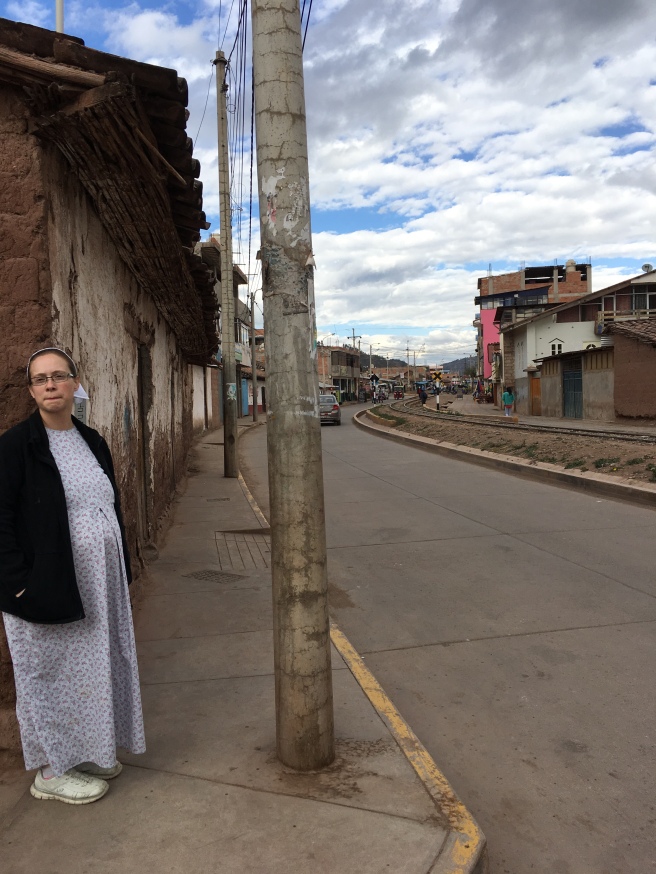 We looked at tile options and furniture options before picking up the paint I’d ordered. They had said it would be in 2 5-gallon buckets, but it came as 10 1-gallon buckets. How were we supposed to carry all this back downtown to the combis?

No fear! The dueña offered to get us a mototaxi, and she even paid our way. Andrew and I loaded up in the moto to go meet Lamar who had been called upon to rescue two lost brooms that the ladies had left behind. Ice cream is delicious, but it can make you distracted….

We caught another combi home. In the morning combi there were over two dozen people packed into the van; the afternoon combi was only just fewer than that. So cozy.

Lamar had called José early in the day and scheduled (again) to meet with him to discuss the farm use, his cattle still there, and so on. José said he’d be there at 7:00. We had supper of beans (red, not black) and rice. It was great. After supper, we had prayer meeting.

Each of us took a turn praying, praying for each other, praying for our neighbors, praying for our leaders, praying for water. I was overwhelmed with emotion as I considered the love of God our Father, of Jesus our elder brother, of the Holy Spirit our comforter, and of all the dear people in that room, and of all you dear ones supporting us from afar. My eyes were leaking and my voice was choking as I prayed.

It is so precious to be part of the family of God, and to be given the opportunity to share His love with others. Let us live to be worthy!

After prayer we had torta y café! A sleepy celebration ensued as we waited for José to arrive.

In the meantime I worked on Joel’s back. It adjusted beautifully and nothing felt too off. My prognosis was that his whining about a sore back was really just a ruse for getting others to notice him. I think all he really wants is a hug. He seemed much better after Andrecito had given him a kiss.

I tried to work on his sore muscles around his arms since he had been swinging a pick or scooping mud for days on end. However, he is far more ticklish than his father; we made no significant progress. 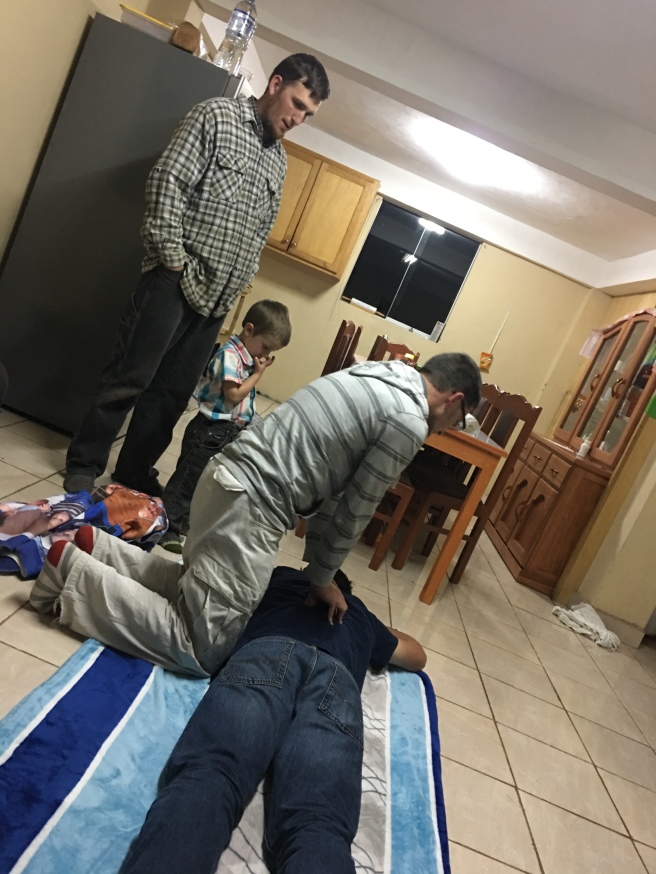 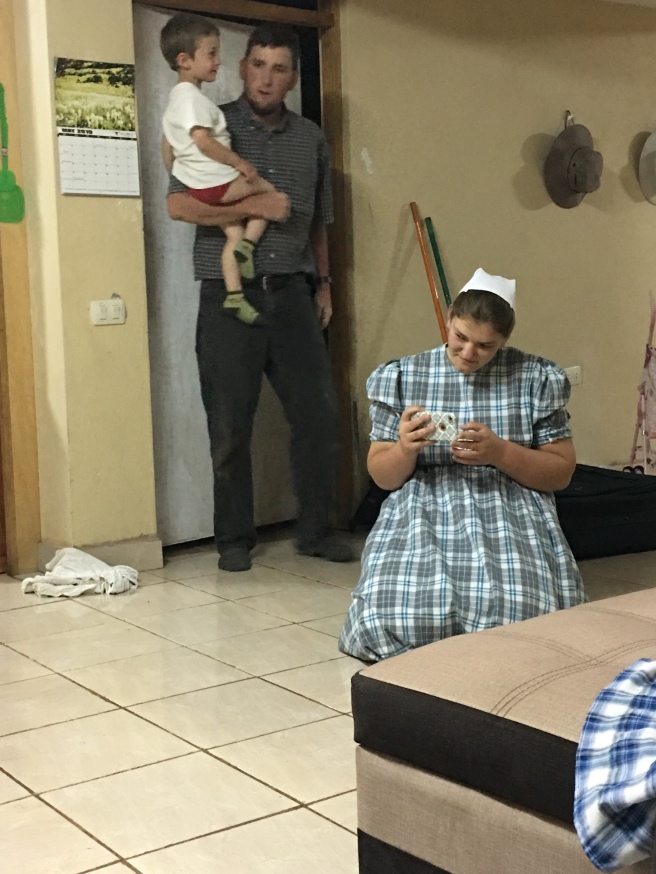 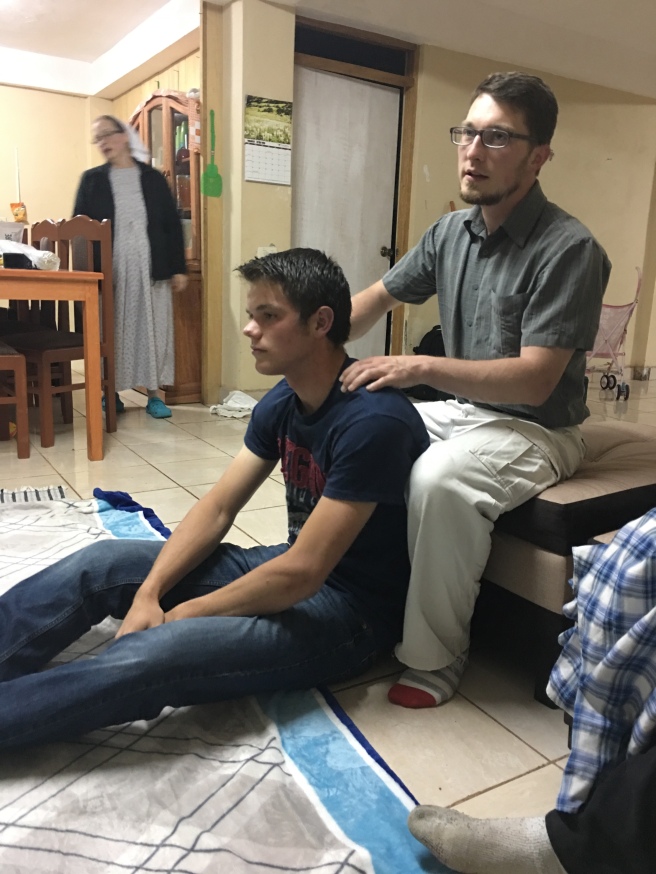 Lamar stayed awake, más o menos, until around 9:00. At one point he read us the weather forecast for Pennsylvania: Beware! Toronto warnings in effect!

We then gave up on José showing up and went to bed; Andrew waddled to bed because he was so sore (yet he refused treatment). Our taxis come at 5:00 in the morning to take us to Cuzco and on to our other home.